And the 2015 Cannes Film Festival Winners are…

Grand Prix (which is like the runner up): “Son of Saul,” Directed by Laszlo Nemes

Best Director: “The Assassin,” Directed by Hou Hsiao-Hsien for

Best Actor: Vincent Lindon for “The Measure of a Man”

P.S. I think the Coen Brothers and crew did a brilliant job this year!

The Little Prince Fails to Fly

The Little Prince was sadly just a little too little. It had moments that were spectacular, and the animation is truly awesome…but perhaps my expectations were just too much. For me, Mark Osborne’s vision just didn’t quite deliver.

I wanted to LOVE it. I walked in and sat down waiting to be mesmerised and transported to my childhood, to listening to my mom read me the beautiful stories that inspired and uplifted and made you realise that shallowness and greed are normal but never satisfying.

The being humble and having a beautiful soul is so much more important.

But although, as I say, it had those moments – those sweet, sweet moments – it didn’t take me anywhere, didn’t transport me to another world…

In fact it made me sad that it would not ignite the next generation. We need films like this. We need stories that are simple and beautiful and light up our children’s imaginations…instead of only watching blockbusters about super heroes. But sadly this has missed the mark. Missed the opportunity. And the Little Prince is unlikely to be a Big Hit at the box office.

Eish! Chronic is chronic! Like the heading here. There’s no other word to describe it. Of course it’s meant in two ways. Chronic illnesses. And chronic, the concept. The film is by Michel Franco and stars Tim Roth who is brilliant.

Roth – who stars in TV series Lie To Me – and who I’ve interviewed before in London (he loves Birkenstocks and was buying a thousand pairs) – plays a male nurse who tends to terminally ill patients. Patients whose own families seldom visit them or call. Seldom can look at them or touch. The horror of witnessing their loved one dying too much to bear. Or the burden of having to look after them, too much hassle. Either way the dying are alone…and Roth is patient and caring. Perhaps too caring? The film is fantastic – we’re never certain whether certain crimes have been committed or whether they are misunderstandings…as if we really were there. So our own judgment is called into the film.

Some of the scenes – washing a dying woman for instance – are just a little terminally long!

But other than that the movie asks genuine questions about who we are as a society, as a family member, as a friend. And what lines can and cannot be crossed.

And it wraps up in a most unexpected way. A different message altogether. But a strong one nonetheless.

Goosebumps. This film – The e18hteam – will have you in tears. Particularly if you are from Africa. But even from France. The film is a compilation of cuts from several documentaries and news items on world media. It’s a true story. The tragedy of the Zambian National Football team – Chiplopolo  – who lost their lives in a plane crash on their way to a World Qualifier in Senegal 18 years and 9 months before triumphing at the African Cup of Nations in 2012 in Gabon.

The country decides to rebuild its team after the tragic loss. It became a national necessity. And with everyone behind them – and an awesome French coach – they led the way for a country in mourning – to a country rejoicing.

Some scenes are so sad to witness – a walk on the beach on the same spot where the 18 died.

The resurrection of Zambia’s national football team after losing 18 players in a plane crash in Gabon in 1993. A 18-year road of reconstruction until destiny makes its move: in Gabon, Zambia becomes African Champion after a long 18 penalty-shoot-out.

I sat in the movie house after it finished and sobbed. With not just sorrow. But joy and pride for coming from Africa. This film is about more than just a soccer team. It’s about a nation, a continent. It’s about the human soul and our constant quest to overcome the unimaginable and triumph!

Sadly many people did not get to see the movie as it wasn’t shown in the Palais…and not even walking distance from it. In a little known cinema I’ve never been to before in all my years in Cannes. But hopefully this film has legs and will get seen by a wider audience. Cannes cinemagoers missed out on one of the most poignant stories every told.

This was such an eye opener – many movies have been done on the drug trade and drug cartels but Denis really captures the horror of this war.

The scene of when they first enter Mexico is one that won’t leave my mind – driving through a ravaged city with bodies literally hanging from bridges having been assassinated leaves one wondering how anyone can live in this environment.

The poverty and devastation is palpable and you can understand how the drug lords can buy these poor people with a few dollars. They have nothing, life is cheap and this is so evident at the end of the movie.

A government task force enlists an FBI agent to help them in the escalating war against drugs played by alejandro (Benicio Del Toro). Emily Blunt plays Kate Macer who is part of the government task force who finds the entire operation very suspicious and questions their actions. She gets pushed into situations she never agreed to but has to make decisions against her values to survive.

Alejandro has ulterior motives to being on this task force which all plays out at the end in a trilling finale. Must see.

Sjoe – Son of Saul Tugs at Everything And very, very slow. And sometimes not quite clear.

Guaranteed to do well because it tackles a difficult subjects rather than because it tackles it well. On a very superficial level – I wished the protagonist had been played by a more engaging actor. It was hard for me to connect with this man…but perhaps that was the intention.

I’ve struggled to write about this film and left my review for a few days because it sat so heavily in my heart.

It felt like the audience in Cannes received it well and respected it for its attempt – possibly successful attempt – to depict the horrors that were the Second World War. Nazi Germany.

It covers all the main moral dilemmas – love, family, loyalty. And it leaves you feeling heavy. Wishing that the world wasn’t heading straight for another atrocity like that.

There are two scenes that make you realise the truth of the horror. One reveals the Jewish people, forced to stip down to nothing. Bare naked people. And the camera zooms in fairly close to show their warts and all. Their sagging bottoms, their rolling stomachs. And then just as you have a shallow thought about this person’s body – soldiers push them – into a huge dugout hole. Just one naked body after the next, rolling on top of each other. To die.

This would not be a date night flick! But it would be a conversation starter. And a reason to love thy neighbour and make this a better world.

It’s weird how Cannes does this to us – shuttles us from one kind of movie to another – so in one instant you’re wanting to party the night away, and in another you’re feeling almost suicidal! This is South Africa House Party hosted by the NFVF Foundation is quickly becoming the events to not miss during the film festival. Lots of great South African delicacies with an abundance of wine and champagne and the amazing chocolate fountain for your ice cream desert at the end.

The music is always amazing making it such a fun night – dance floor is always full and when you need a breather just step outside onto the beach for some of that South of France sea air.

Great venue to network as all the South African movie elite always attend and you are sure to catch up to someone you may have missed during the hectic movie festival.

A great job by Carla and her team for all their hard work at SA House and the huge effort they put in every year to host this party. It can’t be easy and I have already requested my ticket for 2016.

Look forward to seeing all the NFVF staff there again next year. 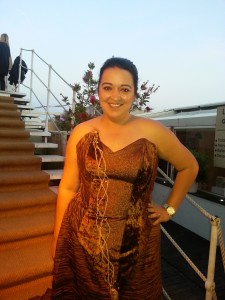 Love is a Blind Lobster

Wow, The Lobster, clutches you with its claws…takes you in…but um, then lets you go and disappoints. Such a pity. I absolutely loved almost 90 percent of this movie…but the final 10 percent negated all that had come before.

It’s a perverse tale where loveless people are punished and turned into dogs and lobsters and horses. Animals other than humans. Kind of funny. Like being the perennial unwanted third party when your partner dumps you and nobody else wants you around anymore.

But you get a chance. A chance to find a partner. Everyone – who’s single – gets to stay in a luxury hotel and try to find another mate who is also single. But your time is short. And there are those who have escaped and hide in a nearby forest. Because if you don’t marry, or escape, you will become an animal.

And if you do marry – you may just want to murder your partner!

In The Lobster, our main protagonist does ultimately escape…but does he? He falls in love. Deeply in love…and suddenly we discover that the film’s motive seems to be to prove that love is blind. 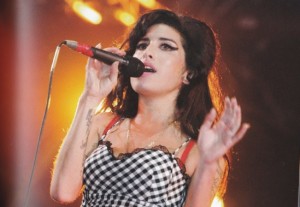 What a talent – what a waste to lose her so young. The world is definitely poorer with her passing. Such an authentic jazz musician who wrote and sang about her life and bared her soul for us all to see.

Seeing her journey from that clean and vivacious teenager when she first started out and where she ended up before her death was very sad. Sad that she was so tormented, sad that she was misled by her husband Blake Fielder and taken to a world of drugs and depression who by the way denies ruining her life with drugs.

I’ve always loved Woody Allen. His take on life. His frenetic-ness to churn out movies so that he doesn’t have to face the fact that he – like everyone – will die one day.

And in his latest film Woody Allen does not disappoint. Irrational Man poses the question that so many of us trip up on in life.

You know when you do something wrong but for a ‘good’ reason. Joaquin Phoenix is brilliant…displaying the same kind of acting he displayed in Gladiator opposite Russell Crowe. Showing depth as a middle-aged professor who is drawn to a young muse but – at first – won’t allow himself to touch her and get involved in a romantic relationship. He’s a philosophy teacher caught up in a major philosophical quandry.

And without giving too much away – he steps over the line. And Woody shows how once over the line, we can never retreat. We can never undo our wrongs. And each sentence, each thought… eventually trips us up and gets us caught in our web of deception.

By the end of the sad, sorry tale, his student – and muse – learns one of the most valuable lessons he was trying to teach her – that to truly know what is the right or wrong thing to do in life is to listen to that voice inside yourself. Because rules can always be twisted to suit our motives…and the rational man can rationalise the most irrational – but the little voice inside us, that ‘feeling’ when you know…that always tells the truth…