Phew. Sobbed my way through the end of  ‘The Beloved’, the Closing movie of the Festival. It stars French film icon Catherine Deneuve and is exactly what you’d want from a French film: love, love, LOVE. They just do it so much better than their Hollywood counterparts who tend to spin a love story into a romantic comedy, usually starring Jennifer Anniston and packaged with some choice cliche moments, a smattering of giggles and not a lot of real feelings. Whereas in ‘Beloved’ – you feel the love, the heartbreak, the tenderness, the joy…and the depths of despair that only true love can take you to.

If you’re not into ‘reading’ foreign films, at least give this one a go…if only because there’s an American in it, so a large chunk of the dialogue is in English. 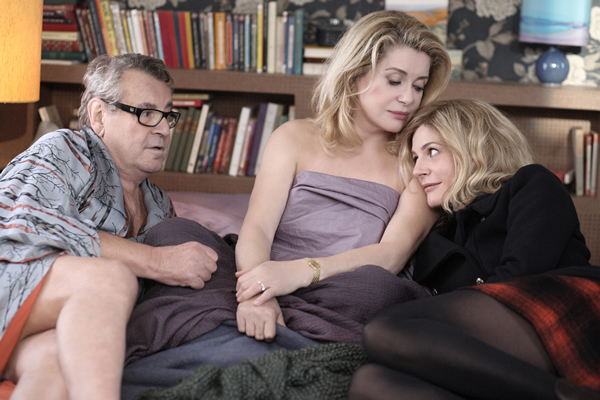 An added delight for me was the unexpectantly brilliant performance of Czechoslovakian director Milos Forman (who is not an actor). Milos is a two-time Oscar winner – for directing ‘Amadeus‘ and ‘One Flew Over the Cuckoo’s Nest‘ – and is one of the most fascinating, kindest men I have ever met.

His life has been shaped by the capture of his parents when he was nine by the Gestapo, and their subsequent death in a Nazi camp. He’s able to discern mountains from molehills, if you know what I mean. I interviewed him in London once after he had almost single-handedly turned Courtney Love‘s life around by risking his own money (the insurers wouldn’t touch her) to cast her in “The People vs Larry Flynt“.

At the time, Courtney told me how Milos had been like a father to her, and had been the first person in her life to believe in her, to believe she could stay off the drugs…and for him, she did, and she gave him a brilliant performance in the film.

So it makes it even sadder that this week in Cannes Courtney has been spilling out of her clothes and out of hotel terraces…I keep wishing Milos could step up and save her again, because she too is an incredible person and one of the smartest, most interesting people you’ll meet…when she’s sober.

Milos wasn’t in the press conference afterwards, but The Beloved’s director Christophe Honoré said of him that “when we contacted Milos about starring in Les Bien-Aimés [as it is called in French], we sent an email thinking we wouldn’t hear anything back. Instead, Milos replied saying, ‘It’ll be the last chance I have to play Catherine Deneuve’s husband’.” See what I mean? He just knows what is – and isn’t – important.