Oh man. Just seen ‘Tree of Life’ starring Brad Pitt and Sean Penn. Expectations were extremely high for this film. It’s helmed by Terrence Malick, a genius and icon in the movie world. But, argh, just half an hour into the film, he suddenly presented us with a David Attenburgh-esque documentary about the birth of the universe (complete with a rather dashing dinosaur). The cinematography was brilliant, but not what we queued for an hour to watch. 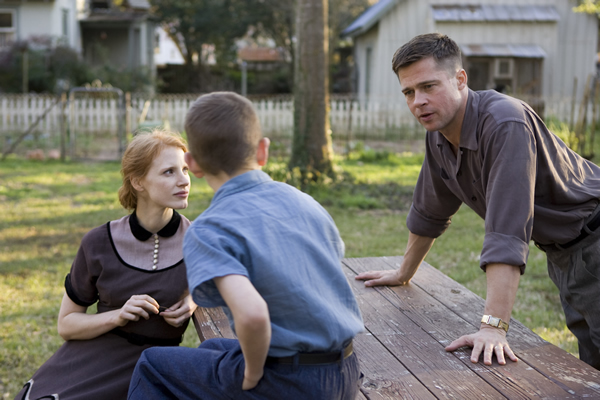 Brad Pitt and Jessica Chastain in 'The Tree of Life'

Once that 20-minute section was – finally – finished, the film returned to the core story about a family in America’s south dealing with a tragedy. But you sat in the theatre, constantly wary that it was going to veer off back into documentary land. It doesn’t.

This is a film that art-house goers may describe as poetic with a musical score that complements its sensibility and sense of  loss perfectly, whilst others may think it’s just a little too slow and self-indulgent, perhaps only meaningful to the people who made the movie.

At the end of the screening, some clapped…and some booed. Some hissed and some told them all to ‘shhhhhh’. Hate when that happens. I got a lump in my throat. You feel so bad for the movie-makers…and it makes you want to argue for all the great things that were in the film – the exploration of why we’re here, why we have to die and is God listening to us?

It’s what attracted Brad Pitt to the movie, as both an actor and producer – that it raises those questions we all start asking at about the age of 11.

Wearing tortoise-shell glasses and sporting a moustache and goatee, Brad is the consumate professional. Sure he’s a movie star. And he’s impossibly handsome (one could write reams about the way his six-pack tugs at his tight white t-shirt). But in the absence of the “incredibly shy” writer-director, Mr Malick,  it was Brad who fielded the press after the screening in a way that commands respect – revealing those broad shoulders are more than just physical.

Brad reveals he was drawn to the script “because it’s about life – why are we here? Why are we going to die? There’s the impermanence of life that we all go through. Everything changes. Nothing stays the same.”

And nor does Brad apparently. “Working with Malick has changed everything I’ve done since,” he says. “The best moments are not planned and pre-conceived. I’ve tried to go more in that direction.”

Apparently Malick allowed the children in the movie  to wear whatever clothes they wanted to each day, and would only give Brad and co-star Jessica Chastain their script each morning – about three or four pages that he wrote then and there. “For Malick, it was about capturing an accident,” says Chastain. (Oops, I’d be careful about saying things like that around some of the booers!) Most scenes were shot in two takes.

A South African journo asked if Brad treated his children in a similar way to the father he portrays in the movie, to which he replied jokingly: “I beat my kids regularly and it seems to do the trick, and I deprive them of meals.’

The film has numerous references to faith, religion and spirituality so, according to perfect Pitt, filming was a wonderful experience with “a lot of theological debate”.

“I remember having a lot of those questions when I was the age of the boys in the film,” says Brad. “And I relate to the Southern upbringing (mine was not as constrained) – but you have the father who’s the provider and the mother who’s the care-taker, however I think the film is more universal though, and speaks to all cultures. As we grow up, we all try on some things that work for you…and some things that don’t.”

Hmmm. Maybe this one didn’t work so well…

Watch the trailer and see for yourself: