We were sitting poolside at The Majestic hotel yesterday evening, around twilight…watching a rather hefty  Bob Weinstein ordering drinks, when we heard SCREAMS! The kind of screams usually reserved for Johnny Depp (Cannes’ favourite Hollywood star). 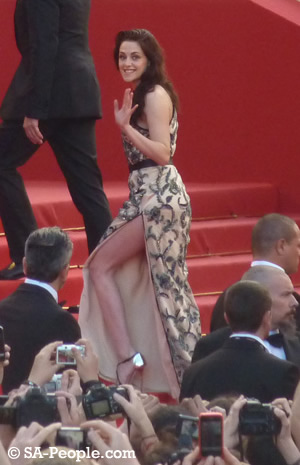 Kristen Stewart on the red carpet in Cannes 2012

So we wandered across the Croisette to find out who was walking the red carpet. And there he was. Twilight star, Robert Pattinson. The French crowds went crazy for him…and this morning, the local Nice Matin newspaper has his picture plastered across the front page…

I’m sure Pattinson will be mortified. It was meant to be Kristen Stewart’s special night. It was her movie – ON THE ROAD – that was having its official screening, and all eyes should have been on her and the rest of the cast.

Not that I think she likes or desires the spotlight at all…but when you’ve got a movie to promote, you hope that’s what’ll make it to the front pages, not your boyfriend! Pattinson will have his own red carpet affair tomorrow night for ‘Cosmopolis’.

Young, hot stars are here in full force. This morning I had the pleasure of spending time in the company of Zac Effron. He’s just so gorgeous in so many ways. He’s not as eloquent as Kristen, or as experienced as his THE PAPERBOY co-stars Nicole Kidman, Matthew McConnaughy or John Cusack…but he’s just as earnest. And focused.

He plays the title role in “The Paperboy”, a story about a young man who falls in love with a sexy, older Barbie doll (Kidman) who in turn is in love with a prisoner on death row (Cusack). His older brother (McConnaughy) is a journalist intent on uncovering the truth about the crime Cusack is meant to have committed. Zac Effront - "eroticised" in The Paperboy, at today's press conference in Cannes

The film takes Zac’s character on a journey of discovery sexually, physically and emotionally exposing him to a murky, dark side of life as far flung from ‘Highschool Musical’ as you could get.

“So much about what we do as actors is about facing your fears and walking through fear,” says Zac. “And I think that something I’ve always craved is that feeling of abandonment, of fearlessness, that you have to have as an actor. And I recognise it as something everyone sitting at this table has. And it’s in these kind of roles, with directors like Lee (Daniels), and actors like these that give you that ‘rush’.

“That’s what I’m hungry for right now. As much as I love the things that I’ve done in the past, this is a new frontier for me and it’s incredibly fulfilling, it’s a dream. So hopefully I can keep doing more things like this.” Director Lee Daniels (‘Precious’) doesn’t hold back in “eroticising” Zac, featuring him and his impressive rack in an abundance of smouldering close-up shots (almost looking James Dean-ish). “The camera LOVES him,” says Lee, “…and I’m gay!”

Singer-actress Macy Gray – who plays a brilliant maid in the movie – adds (in her sweet smokey voice) “Zac is in his underwear in half the movie! I was distracted!”

She also admits she was sooooo in character during the movie that she “even went to the bathrooom and peed as my character”. There was only one day when she broke out of character…”when I saw Nicole on set, I was really starstruck. I just had to say hello!” 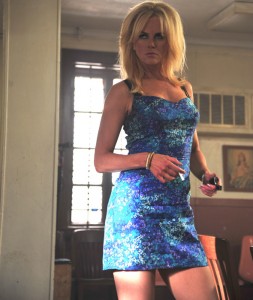 Nicole Kidman in The Paperboy

Nicole surprised me at today’s interview. I’ve done a few things with her from interviews to cocktails, and she’s usually so professional that everything she says sounds calculated. But today I really warmed to her. Like she’s really come into herself now, as mother, as wife, as actress. When Zac says he’s “been in love with her since ‘Moulin Rouge’, she sweetly puts her arm around him, and when Lee Daniels talks about how each character is someone he personally knows from his brother who was in jail for murder to his sister who fell in love with a prisoner, she gently moves her chair towards him, puts her hand on him and leans in to give him moral support.

And she talks with passion about how she was born into a certain (bland) set of circumstances and how she used her imagination to pretend to have a different life, until she found out “there was actually a job, a thing you can do that allows you to explore”. This is what she loves about her profession. The opportunity to try on different characters, different lives.

“I don’t want to ever be pigeonholed. I’m willing to fail. I just want to be given the chance!”