Not Happy. I’ve just come out of ‘The Disappearance of Eleanor Rigby’…and I really can’t even spoil the end for you, because I have no idea what it was meant to mean. 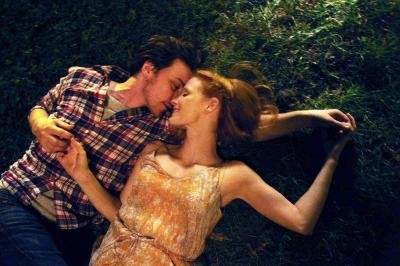 Oh this is the kind of movie that’s so frustrating. It could have been so good. The beginning was so beautiful. It could have been about love and loss and how a couple copes. As they say a tragedy can either bring a couple closer together or send them spinning in different directions far away from each other.

This movie is a mixture of the two. The couple – we finally learn – lost their young baby. I don’t think I’m spoiling anything by telling you. In fact I think it may help to know this from the beginning  so you understand the non-relationship relationship.

And maybe there is some credibility in their mix of these emotions – the closeness and the separateness. But instead it feels like the movie never quite decides what it wants to portray. Perhaps like the couple. But I doubt it. It rather seems that the makers of this film, directed by Ned Benson, were never quite sure exactly what they were making.

The acting is quite fine indeed. Apart from her mother. The New York couple is played by James McAvoy and Jessica Chastain who’s brilliant. But there’s no sense of a relationship between mother and daughter. As if the mom is simply an actress reading her lines with no memory of ever having known Chastain as a child. The father-daughter relationship on the other hand is beautifully executed, and perhaps the most moving relationship in the film. The most believable. And it was wonderful to see William Hurt – as her dad – up on screen again.

The rest – which should have been a heartbreaking tale of how one picks up the pieces after playing the blame games – blaming oneself, blaming the other – instead fizzles in to a movie that leaves you no wiser on the other side. And just disappointed. I wanted heart-wrenching love and loss. Instead I lost two hours of my life watching a film that wasn’t ready to be made yet.