I started my Saturday morning running to the Palais not sure if I’d get in with my yellow card. The lowest of the lows, but got there with no queues and straight in with 45 minutes to spare.

I was exhausted and almost asleep in my chair before the movie started but there was no sleeping through ‘Lawless’, a John Hillcoat movie starting Shia LaBeouf, Tom Hardy, Gary Oldman, Mia Wasikowski, Jessica Chastain (who’s also in ‘Madagascar 3’ which played here yesterday) and Jason Clarke. Lawless, a great shootout scene in the movie

The movie is based on a true story, inspired by true life tales of the author Matt Bondurant’s family in his novel “The Wettest County in the World” (referring to Virginia in the USA) about the infamous Bondurant Brothers bootlegging during the prohibition era. The brothers take the law into their own hands until Rake – played brilliantly by Australian actor Guy Pearce – who comes in from Chicago to clean up the county and starts to take control. What ensues is a power struggle between the Bondurant Brothers, Rake and the police who still feel some loyalty to the brothers but are caught in the middle and have no choice but to follow Rake in his manic quest to stop everyone in his way.

There were at least three scenes where I found myself hiding behind my hands and actually talking myself through them. Very real, very dramatic and very messy as Nick Cave describes the violence in the movie. There are some tender moments in the movie so it’s not all violence from start to finish.

On sentimentality and brute violence

Nick Cave said he isn’t into gratiutious violence per say, but he loves the way John Hillcoat puts it together on screen. It’s fast, it’s messy and it leaves a mark.

Nick Cave was involved in the music and screenplay. One of the journalists asked Nick about ageing and his take on it to which he replied:

“The only people who are happy about getting older are the ones who aren’t old yet. I have to use the thesaurus a lot more, spell check and I have to enlarge the font really large, that sort of shit. It’s awful and I don’t recommend it to anyone.”

Showing his Australian I-don’t-give-a-damn outlook, when a journo was giving him a hard time and making statements that weren’t true Nick turned to Tom and Jessica, with his mike still on, and said: ” he’s a son of a bitch, this guy.”  Tom and Jessica were in hysterics afterwards, probably in disbelief at what Nick said. Very funny to watch.

Actually, there’s a strong Australian influence in this movie with John Hillcoat, Jason Clarke, Guy Pearce and Nick Cave all being involved (and all Australian) –  it amazes me how Australia churns out these great actors and directors – just when you think it’s not possible for any more Australians to get big picture roles there they are. And we have Charlize Theron! In fact Charlize is currently starring with yet another Aussie in ‘Snow White and the Huntsman’ (Chris Hemsworth…who’s also in ‘The Avengers’, whilst his brother Liam is in ‘The Hunger Games’).

Director John Hillcoat on Guy Pearce’s hair in the movie

Hillcoat said that when Guy Pearce first had his hair style done, he sent a picture to Nick Cave who showed his two boys. Apparently his sons couldn’t eat for two days they were so creeped out by Guy’s character, Rake, which is exactly what Guy and John were after.

Jessica said that Maggie comes from experience (and also from Chicago) and starts to work for the Bondurants Brothers which is totally out of their comfort zone as they’re not used to having a female in the house. Even though Forrest (Tom Hardy) is really into the violence, he is hopelessly in love and Maggie has to take control and make the first move…so she felt their roles were reversed in this scenario – she being the ‘man’ and he being more feminine. 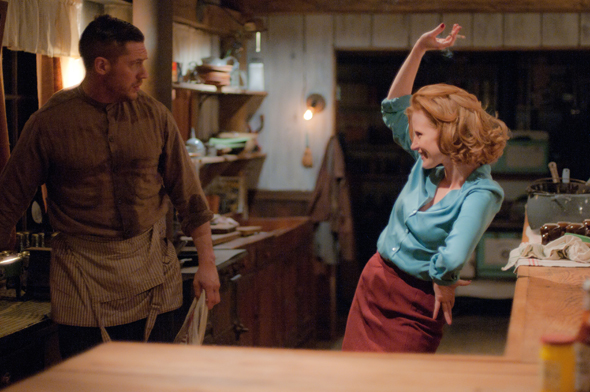 He said: “We spent a lot of time in gym and that was our kind of bonding. Dane DeHaan (Cricket) didn’t spend anytime in the gym though”…which made all of them laugh (including Dane).

About the only question Dane got asked was if his character was based on someone real. “As far as I know he was real, he was in the book, we took his age down a bit but I assume he was real.”

Tom said: “The first time I worked with Gary I just stared at him and basically didn’t say anything, he’s basically my hero so it was a huge honour.” The last question of the press conference was to Jason Clarke on where he was from – some place eight hours west of Townsville, in the desert of Australia called Winton, where he grew up with a father who was a sheep shearer, and where John Hillcoat filmed ‘The Proposition’ and ‘The Road’.

And on that strange note Henri Behar – the main Cannes translator who has been here forever – closes the press conference.