Australian actress Nicole Kidman has described the reaction of the Palace of Monaco to her new movie about the late Princess Grace as “awkward”. 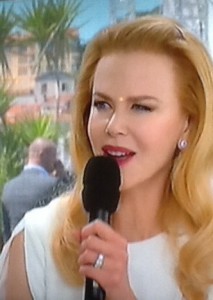 peaking to the press today at the Cannes Film Festival, where “Grace of Monaco” will officially open the Festival tonight – but without Prince Albert II and his South African wife Princess Charlene in attendance – Nicole said: “Obviously I feel sad because I think that the film has no malice towards the family, and particularly not towards Grace and Ranier. It’s fictional, it’s not a biopic.”

She said however that she does understand the Monaco royal family’s reaction and refusal to attend tonight’s Premier. “It’s their mother and father, and I understand the protection of one’s parents.”

She said it’s “awkward”, but she still has respect for them, and would like them to know that “the performance is done with love and an enormous amount of affection for their parents, and the love story of their parents.”

Nicole, wearing a pretty white dress, said she had “goosebumps” when she was offered the role of playing former Hollywood star Grace Kelly.

“My whole career, I’m always looking for things that put me on a highwire, and this was one of those roles. It still is!”

She also said that as a fellow actress there were many parallels between her life and that of Princess Grace on both a professional and personal level if living one’s life in the spotlight.

Two of the main scenes in the movie which are fictional are the visit by director Alfred Hitchcock to Monaco (in reality he phoned), and the presence of de Gaulle at the Red Cross Ball (which he did not actually attend).

The director acknowledged these and said it was a question of images, needing two characters in the same frame, and that “I didn’t try to achieve facts…what I’ve tried to depict is the heart of things.”

“On the occasion of the film “Grace of Monaco” at the opening of the Cannes Film Festival May 14, 2014 and its outing on the screens, the Princely Palace reiterates that this feature can not be described in any way as a biopic. The trailer confirms it is totally fictional…This reinforces the conviction left upon reading the script that it is a production, a page in the history of the Principality, based on historical and literary references using dubious and incorrect wrong data. The director and the producers refused to consider the many comments made by the Palace that would have resulted in a challenging global scenario and characters. The royal family does not wish in any way to be associated with this film which does not reflect reality and regrets that its history has been a diversion for purely commercial purposes.”