Good morning! Just been to see ‘Pirates of the Caribbean: On Stranger Tides’. I get the whole frenzy over the Pirates franchise (and Pirates has certainly captivated a lot of attention here in Cannes)…but am just not a major fan myself. I can never understand how my 10-year-old twins can follow the plot when I’m lost by the second scene. Anyway – because I’m missing the kids so much, I went for them (or at least to impress them!). So the movie is just what you’d expect. Fantastic adventure, great humour, incredible scenery and sets, and brilliant acting by Johnny and his cohorts – Penelope Cruz (the first female priate in the series!), Geoffrey Rush and Ian McShane. It’s unadulterated entertainment from beginning to end.

But it’s in 3D. Was so hoping 3D would be a passing fad. But no, it’s here to stay (at least for a while). I just don’t get it. The film is not hugely enhanced by the 3D so you have to sit with these heavy specs leaning on the bridge of your nose AND you’re forced to look through a dark lens, like you’re peering at the movie through a window pane in the dead of night. What’s with that?

The stars are all in Cannes to promote the movie, and will be at a press conference later today. Johnny’s a regular visitor to the Cannes Film Festival (and far better looking in real life – cheeks that have been chiselled to perfection and eyes that you could dive into and never come up for breath).

Seeing Johnny always reminds me of this time I came to Cannes with a friend who’d sworn off movies after seeing ‘Fatal Attraction’ (I think he was scared his girlfriend would transform into Glenn Close’s bunny-boiler). So while I was doing an interview at the Majestic Hotel, Stan (my friend) went for a swim on the Majestic Beach. And while he was walking out on the pier, he was joined by another guy. They strolled to the end of the pier together to dive off, and were merrily chatting away…when Stan noticed a swarm of photographers following them. “Why do you think they’re following us?” said Stan. “Um, I think it’s because of me,” said the guy. “I’m Johnny Deep”. (Well actually, he said ‘Johnny Depp’ but when Stan told me the story he had forgotten Johnny’s name!) 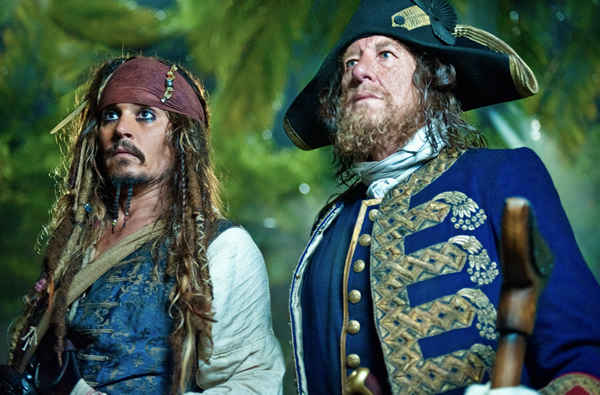 Johnny Depp and Geoffrey Rush in Pirates of the Caribbean: On Stranger Tides

‘Pirates of the Caribbean: On Stranger Tides’ is definitely worth a watch. It’s a loosely-based interpretation of Tim Powers’ novel ‘On Stranger Tides’, published in 1988. This time, Jack Sparrow’s path crosses that of the gorgeous enigma Angelica (Cruz) as they’re both on a quest for the proverbial Fountain of Youth (which will restore the youth of those who drink from it). Aboard the ship of the formidable Captain Blackbeard, they find themselves on an adventure full of twists…and mermaids (whose song is reputed to kill sailors).

For those who didn’t realise, it turns out that Blackbeard is more than a myth. He actually existed in the early 18th Century, an English man named Edward Teach who is often depicted with black ribbons flapping from the braids of his beard. Now you know.