Today went by in a whirl. Two movies. Two press conferences. A red carpet affair. And a missed cocktail event with the Princess of Thailand. For three days now I’ve barely eaten. There just isn’t the time! Last night we ate at midnight. Tonight after 10 pm. Tomorrow’s mission is to eat on time! So, this morning’s movie was ‘Reality’, a lovely Italian movie that has some brilliant scenes and scenery showcasing old and new Rome, old and new values…but it labours its point just a little too much from about halfway through.

It’s about a popular Neapolitan fishmonger Luciano (Aniello Arena) whose family convince him to enter ‘Big Brother’…but while chasing (and obsessing about) this dream, his perception of reality becomes somewhat distorted.

Next up was ‘Madagascar 3: Europe’s Most Wanted’ – the third installment of the billion-dollar ‘Madagascar’ franchise. It’s an enchanting romp through Europe which the kids are sure to love – with the most insanely accurate CG-animated film of Monte Carlo and Rome’s main train station. Co-director Tom McGrath told us afterwards that they had personally visited the locations and taken “thousands of photos” for the animators.

This time around the zoo animals are on the run from an animal control officer played by a brilliant Frances McDormand whose rendition of Edith Piaf’s “Je ne Regrette Rien” was taped in one take, even though she had never sung before and begged for the producers to use someone else’s voice. Escaping her evil clutches, the ‘Zoosters’ take refuge in a circus where they make new friends, learn death-defying acrobatics…and desperately try to make their way home to the zoo. All the lead voice actors were at the press conference afterwards – Ben Stiller, Chris Rock, Jada Pinkett Smith, David Schwimmer; as well as two of their new ‘friends’ – Jessica Chastain (from ‘The Help’) and legendary funnyman Martin Short. The last time I met David was when he was here for ‘The Pallbearer’ in 1996 (oh my goodness, that’s a long time ago, feels like yesterday…). It was quite funny coz he sort of hit on me and invited me to a Harvey Weinstein party down at the Majestic Beach (which was heaps of fun…).

But there was none of that today in the conference. David had a polite smile fixed to his face – he’s now happily married and a proud dad to a one-year-old child. There was lots of child talk in the conference – it being a movie for kids and all, and most of the stars being parents themselves.

Jada admitted this movie will be her kids’ first experience of a ‘circus’. She also conveniently mentioned that her son Jaden begged her to phone Jeffrey Katzenberg (CEO of DreamWorks Animation) and ask him to play Jaden’s new rap song over the credits at the end of the movie. She says she told Jaden “maybe next time”. I say ‘conveniently’ because Katzenberg happened to be sitting in the front row of the conference!

Ben said his kids love the ‘Madagascar’ movies and don’t even notice that Alex the lion has his voice. Chris admitted he loves children’s movies and often gets more into them than his kids do…sometimes forcing them to watch till the end because he needs to find out “what happened to that bear”. And Martin quipped that since his children are in their ’50s he doesn’t get to take them to the cinema much anymore!

The ‘Madagascar 3’ press conference was followed immediately by a special Haiti press conference, with an impassioned plea from Hollywood actor Sean Penn for the world to get behind Haiti and help turn it around – actually, his words were:

“It’s not only celebrities who went for a day. It’s the whole f***ing world. It’s all of you [pointing at us/journalists]. The reason we have Haiti fatigue is because there was never a commitment in the first place.”

When I get time (and when I’ve eaten) I’ll do a longer write-up on the press conference because it was powerful. And it was a special event in Cannes – the first time a press conference has been held that’s not about a movie. The Cannes Film Festival has officially lent its support to Penn’s J/P HRO, Paul Haggis’ Artists for Peace and Petra Nemcova’s Happy Heart’s Fund “for their united and extraordinary work in Haiti”. 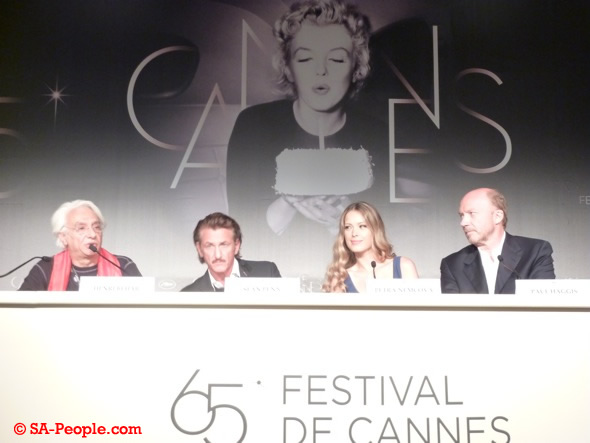 Yikes – people talk about those who are beautiful both inside and out – but Petra (who’s apparently dating Penn and happens to be a Czech supermodel) has to be the epitomy of that phrase. A truly beautiful person who has worked valiantly in 14 countries to help the locals at least a year after disasters, when it’s no longer ‘sexy’ to do so.

Giorgio Armani’s niece Roberta was also at the conference to deliver a message from her uncle – who is co-hosting the benefit event this evening – about how much he “adores Sean…as an actor and humanitarian” and how they’ve shared a 20-year relationship.

This evening was the ‘Madagascar 3’ premiere with all the stars on the tapis rouge. Very sweet to see a lot of the photographers wearing colourful wigs, as per the zebra in the movie. Sometimes it’s easy to dislike these photographers – they push and shove their way around, display zero manners, stand on stepladders, get in the way and frantically photograph, photoshop and post pics online. But then sometimes they put colourful wigs on…and you’re reminded that they’re just movie fans…like the rest of us. 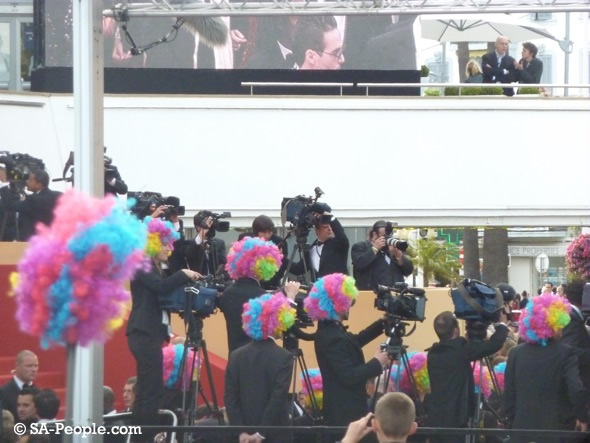 The stars of Madagascar 3 delighted the crowds by waving...(yes, it doesn't take a lot). Credit: Anthoni Panayis 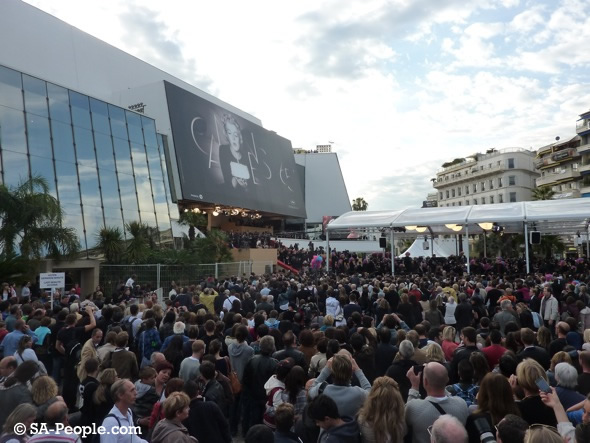