I’m exhausted. Had  COSMOPOLIS for breakfast, Kanye West’s CRUEL SUMMER for lunch…and RENOIR for dinner. And in between all of that managed to have a couple of Kir Royals on the Eden Roc terrace, with a dressed-down (but still gorgeous) Kylie Minogue sitting at the next table. (She’s here for “Holy Motors”.) 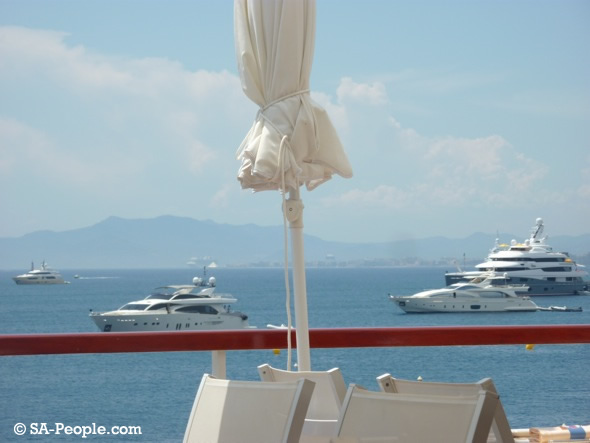 Eden Roc is part of Hotel du Cap…and is where all the mega-celebrities, movie stars and producers hang out to escape the hecticness of Cannes. It’s also where I got married…and today was our anniversary.

‘Renoir’ wins as best movie of the day. Such a beautiful movie, like watching one of the artist’s painting in motion. The scenery is sublime. He used to live near here (Cagnes-sur-Mer) so it’s exquisite – wild grass, olive trees and terraces overlooking the Mediterranean. It’s about art and love so it’s like indulging in a gorgeous feast.

Kanye’s “Cruel Summer” was this incredible seven-screen experience. Five around us, one on the ceiling and one on the floor! It starts with somebody stepping through a trapdoor on the screen above us…and has some incredibly stylised shots that imprint on your mind. Like three camels walking up a steep dune…on the right hand screen, a falcon spreading its wings…on every screen around us as if it’s going to envelop you, and a heartbreaking scene of a blind girl running through her parents’ palace with wild abandon because her mother, who loves her so much, has strung strings around the palace so she can hold onto them and run free, knowing she won’t bump into anything.

The press conference with Twilight’s Robert Pattinson and ‘Cosmopolis’ director David Cronenberg (“Crash”, “The Fly”, “A Dangerous Method”) was totally entertaining. Writer Don DeLillo, whose book the movie is based on, was present…which was refreshing. Like listening to God talk, when you get to hear from the original creator of a story. Cronenberg’s brilliant. Not just because of his body of work – including ‘Crash’, ‘The Fly’, ‘A Dangerous Method’ – but because he’s just not into abstract analysis. When a journalist asks an abstract question and Robert Pattinson battles to answer succinctly, Cronenberg interjects: “It’s not you. The question was flawed.”

I know this is incredibly shallow to say – but I have to tell you – I was a little surprised to find Pattinson’s actually quite good looking in real life (and very likeable – with typical British self-depracation, maybe a little too much). I hadn’t seen him that way before. And then I realised – it’s because his face has colour. Actually a lot of colour – he blushes bright red regularly. They must have had to put a LOT of white powder on him for the Twilight series!