Q to Matthias: Was wondering what your prospects are looking like for Hollywood? Hollywood is always looking for well-built good looking guys who can act. Have you had any movement from the States?

A. Funny you say that because just last week they contacted me to do Rambo 34 but I said I would only do it if they gave me 35 and 36. In all seriousness there has been some movement but I’m in no rush, I’m still young and looking to work on interesting projects Rust and Bone premiere in Cannes tonight, stars and Director standing on the right

Q to Marion: How was it acting with Matthias?

A. Acting with Matthias was intense – an intense experience. You forget you’re on set and it becomes your reality. I’ve felt really fortunate to work with such outstanding actors and for Matthias, he was of the same ilk as Leo Di Caprio and other top actors. I find it hard to talk about you whilst you are sitting next to me [she says this whilst turning to him, and touching his leg…he blushes]. Matthias has a desire to explore which makes him a great actor. I have never seen a picture or an image of him but knew his name. I imagined him to be smaller. I thought I would be working with a much smaller person and the 1st time I saw him I saw his large back.

After the first reading together I felt joy, felt so happy that this would be a beautiful experience working with Matthias.

I think Matthias is a stupendous actor and I don’t think he will have any problems crossing over to Hollywood. I wish him a great career.

Q to Matthias: Do you want to answer to this?

A. [He repays Marion with a compliment.] In the beginning I was very intimidated to work with Marion – 3 weeks into shooting I remember seeing Marion in the wheelchair looking very depressed and all slouched over and I thought “Oh no, this is not going to work” and it made me really scared but what I didn’t realise was that Marion was already in Stephanie’s world and totally in character and that she is such a great actress who pushes herself to her utmost ability and it was a stunning experience.

Q to Matthias: Matthias this is your first Cannes Film festival – how are you finding it?

A. I’m very excited to be here but I’m even more excited to be able to see the movie tonight as I’ve not seen it yet and there is a lot of talk about it so it is great to be here with the entire team and let’s make it a party. I just don’t want to anticipate too much and hope it’s fun.

Q to Marion. How is it being in Cannes?

A. This is my 1st movie in competition which feels great as Cannes is so iconic and I’m really pleased to be here with a Jacques Audiard film. 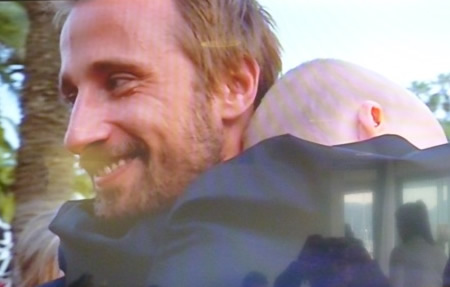 Matthias on the red carpet this evening, holding his young co-star

Q to Jacques. How do you feel about violence?

A. I hate violence but always seems to include it to keep it as real as possible but I try to stay away from gory as Stephanie’s character needs to be able to watch Matthias’s character fighting but still appeal to her.

Q to Jacques. Why was the film shot in Antibes?

A. The film was shot in Antibes (Biot actually, which neighbours Antibes)) because that’s where the Marine park is and he wanted to shoot in a sunny climate.

Q to Jacques. Tell us about getting together with Marion.

A. I always wanted to work with Marion and wanted our destinies to come together so that we could work together. I was touched by Marion’s acting – she’s always so sensual and virile and can follow an emotion through to reach the other side, at the same time being very feminine.

This was a film shot with not a lot of preparation but it worked out and I’m happy with the result.

Q to Marion. How did you feel about the script?

A. When a script moves me it excites me which this script did, but even till the end…I still didn’t really know Stephanie (her character) and I told Jacques that it scared me a little. Jacques said that he didn’t know exactly where it would go either but that it was ok.