Went to the Hotel Martinez for dinner tonight, and it was simply dripping in celebrities. Almost tripped over Robert de Niro as he stepped out of the elevator, and then Naomi Campbell swung past our table (with a major entourage following her, including her billionaire Russian boyfriend). I almost didn’t see her because I was choking over the menu. My starter – a lettuce-leaf salad – was 28 Euros (and that’s because I didn’t order the more expensive option with prawns). 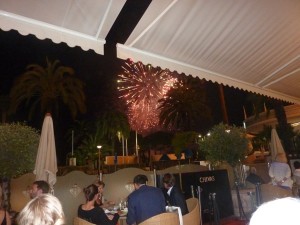 Watching the fireworks from our table at the Martinez Pic: Anthoni Panayis

There was a smorgasbord of other international stars milling about – mega French star Jean Dujardin was smouldering, and huge Chinese star Fan Bing Bing floated past in a chiffon frock.

Most popular celeb was Michelle Rodriguez (from ‘Lost’) who emits such an approachable aura that everyone – and their poodle – stops by to chat to her.

After a stunning fireworks display (c/o a party that Kany West was singing at), we then headed over to the South African party on Rado Beach. Fantastic! SA always wins best party because…well, because they throw the best party! Even tho’ Kanye and his pals Leonardo di Caprio and Jamie Foxx were at the other party, South Africa’s jol still had the best food (so why did we eat at the Martinez?!), yummiest wine and outstanding vibe!

So divine talking to a guy like him – and South African producer Jeremy Nathan – they’re just passionate about what they’re doing, and truly LOVE film. 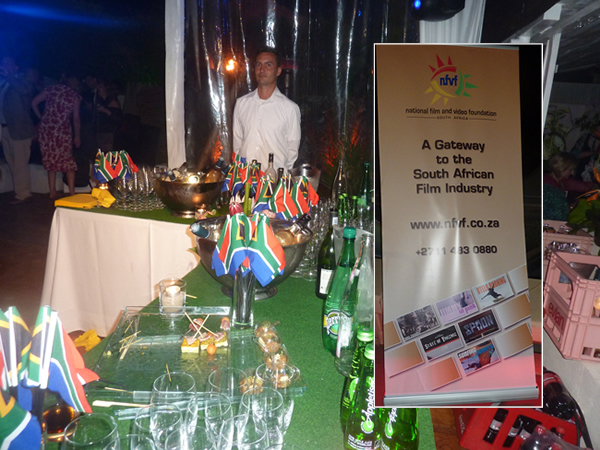 Charlize Theron is one of the few stars who hasn’t made it to this year’s Cannes Film Festival…but she’s not forgotten! Here she is on a poster just outside the Martinez Hotel: