Saw a great South African movie this morning – ‘Skoonheid’, directed by Oliver Hermanus. Fantastic production. Absolutely international quality. Brave and brilliant acting. I don’t think it’ll be a huge commercial success – the subject matter (a married man dealing with misplaced lust) is a little sensitive, and there are some sex scenes that could freak the odd tannie out. But wow, really impressed.

No huge political overtones. Just a couple of comments here and there, and observations on the strict codes of conduct expected of and by South Africa’s older generation, compared to the freedom the younger generation enjoys…but that’s a theme that crosses cultural and national borders, and so it’s a universal tale of forbidden desires and the tragic consequences of living a life tainted by secrets and lies. The cast and crew took to the stage before the screening of the film in Un Certain Regard. This is the first Afrikaans film invited to the Cannes Film Festival! And it’s unlikely to be the last. 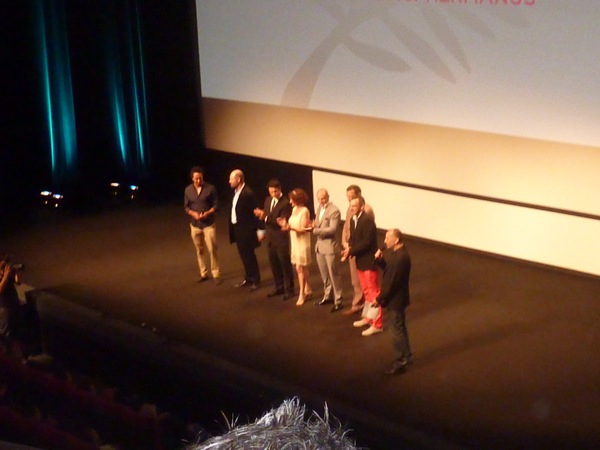 The 'Skoonheid' cast and crew before the film's screening in Cannes

Dashed back to the press office in the Palais just in time for the Jodie Foster press conference. Had to miss her movie – ‘Beaver’ – in order to see ‘Skoonheid’ because they were on at the same time. Anyway, she’s amazing. Such a deep and serious voice. I’ve never heard anyone say ‘hi’ with so few syllables. Short, sharp and to the point. Most of the questions were about Mel Gibson. Oops. I’ve run out of time. Will tell you more later.