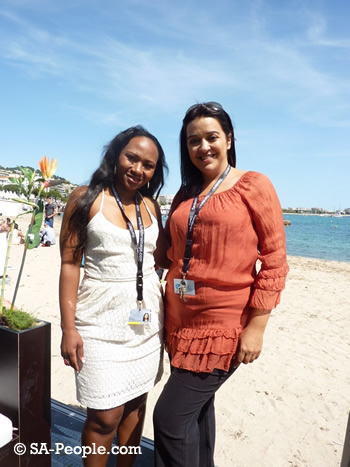 At least a hundred South African film-makers have gathered in Cannes this weekend to promote their projects, and seek funding, co-production or distribution deals, which is what the Cannes market is all about.

South African’s Minister of Arts and Culture will also be here in Cannes to sign a co-production treaty with Ireland (we’ll be there to report on it tomorrow).

So the flag is flying high – and it makes you proud to be South African, especially when you don’t live there anymore…and you see the quality of what’s coming out of the country. It’s fantastic.

Each year, one of the highlights of the Cannes Film Festival for me is visiting the SA Pavilion where the South African National Film and Video Foundation (NFVF) are set up to promote SA projects.

Below is a list of South Africa’s line-up for Cannes 2012…and over the next couple of days I’ll add more info about each film. South African flag flying high...at the entrance to the SA Pavillion in Cannes 2012 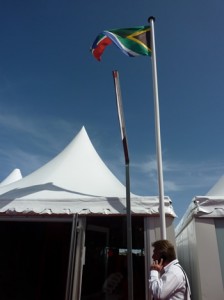 The Adventure of Supermama
She’s a heavyweight Superhero!

My Zulu Promise
She dreamed of meeting The One.Then she met The Two.

Tok Tokkie
Tonight, Louis will find out that Cape Town is haunted by more than just ghosts.

The Umbrella Man
Sometimes losing is in fact winning

Otelo Burning
Freedom is a revolution

Combat
Storytelling is a weapon of mass destruction.

Five Fingers for Marseilles
There are no good men

Liefling
A musical for the whole family

Semi Soet
Half a truth, half a lie, a whole shenanigan

Asihambi – We Will Not Move
An honest war about the fight for belonging, national identity and proud heritage of a poverty stricken indigenous community in post apartheid South Africa

The Dream Of Shahrazad
Even revolutions start with a story

I am Craig
“Should She…or Shouldn’t he?”

Sobukwe – A Great Soul
“There is only one race, the human race.”