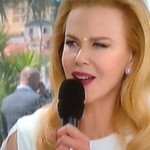 Australian actress Nicole Kidman has described the reaction of the Palace of Monaco to her new movie about the late Princess Grace as “awkward”. Speaking to the press today at the Cannes Film Festival, where “Grace of Monaco” will officially open the Festival tonight – but without Prince Albert II and his South African wife […]